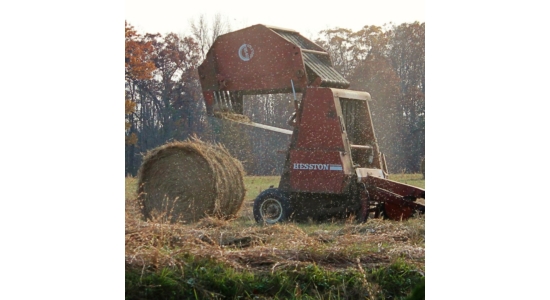 During Summer travels through the countryside you can often see large grass fields filled with numerous large round bales of hay and straw waiting for being transported to the farms to feed animals. Basically, you are witnessing another agricultural engineering invention that has helped farmers around the world to complete their harvesting so much more efficiently.

During Summer travels through the countryside you can often see large grass fields filled with numerous large round bales of hay and straw waiting for being transported to the farms to feed animals. Basically, you are witnessing another agricultural engineering invention that has helped farmers around the world to complete their harvesting so much more efficiently.

You might still remember the old images of dozens of strong farmworkers sweating on newly mown fields busy with scythes and rakes. Well, of course, those times are long gone. Not only the mowing work is fully machined, but also the gathering and binding of the mown grasses (hay or straw). Nowadays you only need one person for this work: a handy driver of a tractor equipped with special harvesting trailors.

For making these large round bales you see laying on the fields you would need a mechanized trailer that in only one go can pick up and collect the crop, binding it and drop it back on the field. How does such trailer work? On the internet, you can watch several videos that demonstrate the technical process in a very detailed way.

This clever piece of industrial design was invented over 50 years ago by professor Buchele and his students at Iowa State University. They called it „a whale of a bale.” The tractor drives over the line of freshly mown grass so that the trailor-reeks can pick it up and swirl and compress it into a large roll. This ongoing process of rolling-up the grass or straw is done by some 6-8 rubber flat belts.

The capacity of the bailer machine is set for a certain diameter of the roll or bale, say 150 cm. When it has reached this size, the tractor stops to let the baler-machine wrap the bale with a net – or even a protective plastic sheet – that holds the grass or straw together. Finally, the trailor hydraulically opens on the back and ejects the ready-made bale rolling back on the field. You understand that the large bales can weigh quite heavily. Especially when the grass was collected after rain, such bale could weigh easily over 500 kilos.

After the Buchele invention, many agricultural machine companies manufactured their round balers. John Deere, Claas, and NewHolland to name a few. These companies are manufacturing some very large and sophisticated baler machines using the latest technologies in hydraulics and wrapping.

We are very proud that at Moltech we have the technology to make one of the fundamental parts of the round baler machine: the baler belts. In the heavy-duty harvest season every so often farmers need to replace some of the belts inside their baler machine. To make such on-duty replacement easy the belts are equipped with steel fasteners. Our round baler conveyor belts are made from top-quality materials, identical to the original, in tensile strength, surface, and fastening. This way, we are happy to contribute to make harvesting a smooth job.